Magnesium During Pregnancy– How To Use Magnesium Oils, Gels & Lotions?

Our body contains more than 25 mg of magnesium. Most of it is stored in the bones, tissues, blood and the intercellular fluid. During pregnancy, however, this amount will not be enough.

Magnesium plays an important role in the metabolism of carbohydrates, fats, nucleic acids and proteins. It also contributes to energy production, has spasmolytic effects and helps reduce the risk of cardiovascular disease. Furthermore, magnesium also acts as a stimulant in the regulation and absorption of several vitamins, minerals and trace elements.

The daily requirement of magnesium for an adult is about 400 mg, but our diet only contains a fraction of it.  Even though there are many foods high in magnesium, our soil is so depleted of magnesium that we need to supplement our bodies needs. There are also certain medical conditions and circumstances in life when the requirement increases, for example during pregnancy and breastfeeding, illnesses, inadequate dietary intake, being on a diet, a lack of or exercise or intensive sport.

It is important during conception, pregnancy and delivery to meet the body’s increased magnesium need. It may be wise to go for the best type of magnesium and natural ways instead of taking medicine. Besides adequate dietary intake in the right quantities and quality, another good way to prevent taking too much magnesium during pregnancy and to prevent diarrhea caused by excess amounts of magnesium is topical magnesium.

How much magnesium should be taken during pregnancy?

Before conception, or even during the planning phase, it is recommended to increase the amount of magnesium taken. This means 10 mg of magnesium per 2.2 lbs. of total body mass per day.

In case of high-risk pregnancy, 10mg/2.2 lbs. of total body mass should be enough, but special care should also be taken to provide the adequate amount of magnesium for the body. It is worth pointing out the fact that we are all different and everybody has different needs.

Regularly consult with your gynecologist – not only during the early phase of pregnancy but for the whole duration of it – to make sure you have adequate amounts of magnesium intake.

Magnesium During the End of Pregnancy

It is clear that before conception and even during the planning phase, it is recommended to increase the amount of magnesium taken. It is similarly important to know how long magnesium should be taken during pregnancy.

Abdominal cramps and tightness, uterine contractions, mood swings and intense headaches during pregnancy may all be signs of a lack of magnesium at the early stages of pregnancy.

Although the fetus will certainly top up its supplies, the unpleasant symptoms should not be ignored because magnesium deficiency during pregnancy may lead to more severe complications.

The Importance of Magnesium Supplementation

According to a 2013 study, preeclampsia and premature birth may be linked to low magnesium levels during pregnancy (hypomagnesaemia) and magnesium deficiency.

Several scientists suggest that in order to avoid complications during delivery, postpartum depression and premature birth, mothers during pregnancy are advised to regularly consume magnesium. Clinical trials have found that mothers that supplement with magnesium during pregnancy give birth to bigger, healthier babies, and preeclampsia, premature birth, sudden infant death and birth disorders (including cerebral paralysis) are also less common.

We can talk about preeclampsia if hypertension occurs after the 20th week of pregnancy, and additionally, if proteins are present in the urine. Preeclampsia occurs in 7% of the number of pregnancies, and according to the Preeclampsia Foundation, it is the cause of at least 76,000 infant deaths.

In more severe cases, it can cause cramps similar to the symptoms of epilepsy for pregnant women, which is called eclampsia. It can also cause symptoms such as pulmonary edema, blood-clotting disorders and placenta praevia. On top of all this, it may also cause problems for the baby, such as premature birth, chronic oxygen deficiency within the uterus for the fetus and even development disorders.

It is essential that the symptoms are identified at the earliest possible time, because it makes finding the right treatment for the disease possible, and severe complications may also be prevented.

Most physicians recommend staying in bed, relaxing and resting to reduce high blood pressure, but if it persists, the pregnant mother may even get magnesium intravenously. This method is quite rare, even though it is recommended by many researchers and practitioners to determine magnesium levels of the red blood cells (also known as EXA test).

In case of the occurrence of hypertension during pregnancy, a daily intake of 300-600 mg of magnesium is also recommended. It is of course very important that you consult with the obstetrician or practitioner before administering any form of dietary supplementation.

For more than 25 years, magnesium-sulfate has been applied successfully in the treatment of preeclampsia. With the increased spread of the latest diuretics and muscle relaxants, however, the popularity of magnesium-sulfate has decreased. Pharmaceutical companies keep conducting expensive researches to cross-check their latest compounds with magnesium-sulfate and magnesium-chloride. Most studies, however, seem to support that magnesium is actually more efficient than synthetic medicine, and that its use reduces the risk of infant death, and is safe for the mother and her baby.

How Can I Increase My Levels of Magnesium During Pregnancy?

There are many different ways to administer the necessary amount of magnesium for our body:

It is the most common practice and therefore the most widespread method applied by physicians. These products contain magnesium salts whose absorption rate within the body may vary. They do not exert their effects topically, but reach the tissues and cells through the digestive and circulatory systems, which causes discomfort in the body and may have side effects as well. This is a way through which magnesium can reach its destination in the body very slowly, and the symptoms of magnesium deficiency are relieved much slower as well. Some of the side effects of the pills may often include diarrhea during pregnancy, which may pose an increased risk, and the magnesium already administered also leaves the body immediately.

The use of inorganic fertilizers so popular these days in agriculture was much less commonly used just a few decades ago. Besides other factors, this does not favor the adequate magnesium levels in the plants either. Due to this, keeping a healthy diet in itself it is not possible to adequately cover the body’s vitamin, trace element and mineral needs.

There are, however, foods that contain higher than average amounts of magnesium, such as dark green leafy vegetables (e.g. Swiss chard, spinach and sorrel), whole grains, oily seeds, different types of legumes (you should be cautious with your legume consumption during pregnancy and breastfeeding due to their bloating effect). Avocadoes, dark chocolate and bananas are also high in magnesium.  These magnesium foods are high in magnesium and super healthy for you too.

But the Best Way To Increase Magnesium Levels Is Topically

The largest organ of the human body is the SKIN, which has exceptionally good absorption for active agents, which can therefore reach the blood stream much more quickly and efficiently to their target destination as well.

Spraying or rubbing magnesium on the skin enables fast magnesium reinforcements without any side-effects, such as diarrhea. This is the fastest, most effective way of magnesium reinforcements without having to worry about any side effects, such as diarrhea. It is the fastest method of administering magnesium, because the required amounts of it are absorbed. During pregnancy, it is also the safest and most recommended method, because it has no side-effects.

Administer transdermal magnesium even during pregnancy

According to the latest studies, hair follicles have a significant role in transdermal absorption.

Benefits of consuming adequate amounts of magnesium during pregnancy

author of the book Child Problems and the Baby

“I was expecting my third baby when I first came across Ancient Magnesium Gel. I was really glad to have found it, because I had had symptoms that could have been indicative of magnesium deficiency, such as leg cramps and fatigue. With tablets and pills we may not know how much of them gets absorbed. As for Ancient Magnesium, it gets fully absorbed through the skin. At first, however, I wasn’t sure how much of it I should administer, and so I frequently experienced sensations of itching and tingling when using the gel. Due to this, I now apply the gel or the concentrate in doses of 2-3 throughout the day, thus eliminating the tingling sensation." 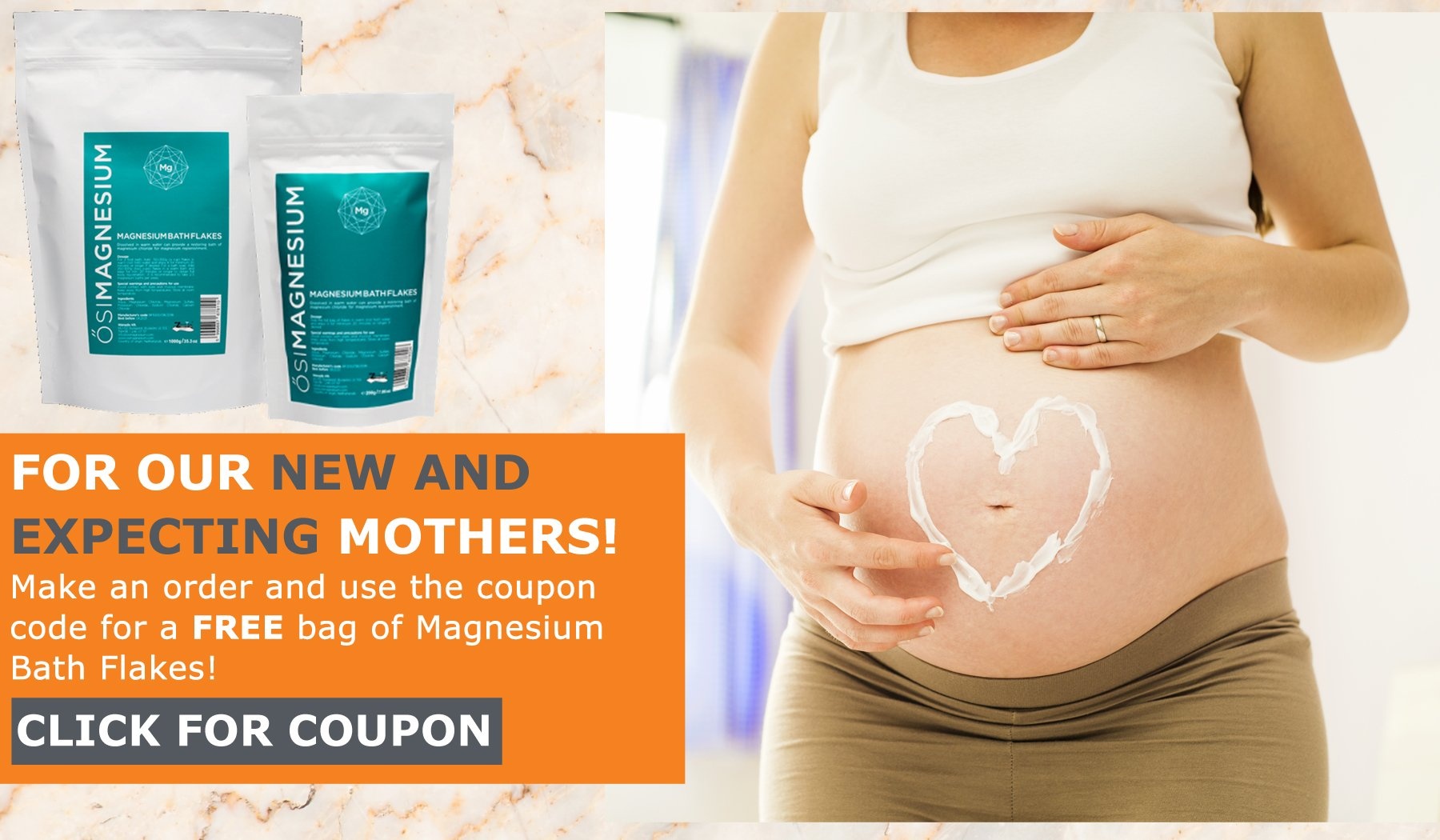